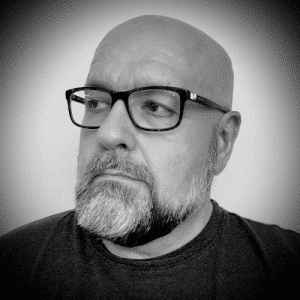 David Cummings – voice actor, musician, raconteur. Born and raised in Toronto, Canada over 50 years ago. In 2011, David rekindled his love of voice acting and audio horror storytelling with a new venture called, “The NoSleep Podcast”. Launched on June 13, 2011, he served as both host and producer. He continues to host the show while turning over the production to his talented team.

David and his team of voice actors, producers, illustrators, and composer Brandon Boone have grown the show to become one of the preeminent audio horror storytelling podcasts in the world. Currently with over 450 episodes produced totaling over 800 hours of content, the podcast has been downloaded over 175 million times. It has been featured in such media as USA Today, Wired, Fangoria, Flavorwire, Popsugar, Bustle, Blumhouse and many more.

The opportunity to voice act on many projects has been one of the highlights of his career, having performed not only on NoSleep but also Darkest Night, Deadly Manners, The Black Tapes, Smalltown Horror, Creepy, and Pseudopod, among others. Since August 2014 David has run the podcast full-time through his production company, Creative Reason Media, Inc. He is proud to use Warm Audio mics and preamps for his audio recording.

David currently splits his time between Toronto and New Jersey with his wife Kelly.

You can reach David and our support team at: admin@thenosleeppodcast.com