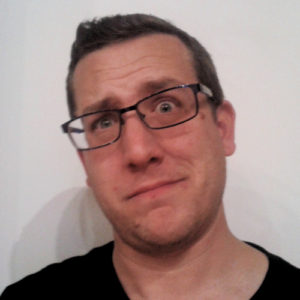 Elie was born in New York City and raised just outside of it. He recently moved from the Western Hemisphere to the Eastern Hemisphere but has never been in the Southern Hemisphere. He started down the voiceover path in 2004, with formal voiceover and marketing training by Creative Voice Development Group.

His professional voice work ranges from children’s educational material to real estate advice website audio, with a scientific article and a guided tour of a Polish salt mine thrown in for good measure. In between all that, there is a lot of amateur audio drama that Elie has been a part of, including such groups as Darker Projects, Dream Realm Audio, and all of the Escape Artists podcasts (Podcastle, Escape Pod, Pseudopod and Cast of Wonders).

In his free time, Elie enjoys cartooning, listening to old-time radio drama, and referring to himself in the third person. By this time next year, he will also have mastered speaking in future perfect tense.