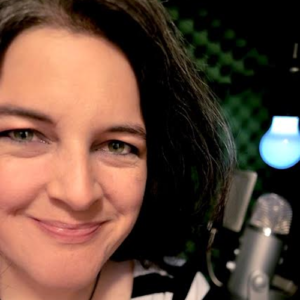 Born and raised in Los Angeles, Erin B. Lillis received a long Catholic education and then proceeded to darken everything she created with that taint of spiritualism and the otherworldly. Erin’s fascination with magic, the book of Revelation and the general mysteries of the unknown was not helped by the fact that her mother claimed to be the world’s tallest leprechaun and her father was probably a reincarnated shaman.

An only child, Erin would entertain herself with a book of acting monologues and recording what was probably the world’s first podcast into her microcassette recorder which she carried around claiming it was for her novel ideas. During the summers, she starred in the local day camp’s (unintentional) improv comedy performances but after the ripe age of something like 10 she gave up the stage and her dramatic dreams in favor of self-consciousness and awkwardness.

It wasn’t until her 30s that she rediscovered her innate Leo need to be a star and she’d return home from her day job of film marketing to whisper sweet words like “Press 0 for the operator” into her brand new microphone for actual paying clients. This eventually led to the creation of her podcast SubverCity Transmit, an LGBT-friendly home for speculative fiction short stories which she co-produced, wrote, starred in, branded and marketed.

In an effort to take her new voice acting hobby to the next level she began taking classes at the Groundlings (for improv) and at Kalmenson & Kalmenson (for voice acting). As a near direct result, she began additional story narration for the MashStories podcast and began landing more and more roles for commercials and explainer videos that did not require the recitation of phone numbers or office departments.

Now with semi-impressive things in her portfolio, it was time to approach the NoSleep podcast with a plea for notice so that she could actually begin narrating stories that better fit her personal style. Luckily, David Cummings had a need for a “Mom Voice” type and Erin was offered a place amongst the cast.

In addition to her now regular NoSleep appearances, Erin has voiced several video game characters, audiobooks, eLearning courses and web series narrations. She can be heard in the “Stifled” video game and as the narrator of the Our Haunted Destinations web series by Hauntology Productions. More of her voice acting work can be found at ErinLillis.com/voice Her goal is to one day voice animatronic creatures at an amusement park.