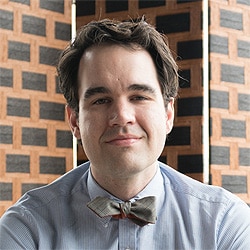 Kyle Akers is a voice actor from Kansas City, Missouri. He has contributed to The NoSleep Podcast since Season 2, and has read for Pseudopod, Escape Pod, Podcastle, The HP Lovecraft Literary Podcast, Chilling Tales for Dark Nights and many more.

Prior to voice acting, Kyle toured the country as a professional musician, singing and playing bass guitar for the electro-pop band Antennas Up, which enjoyed success through several national television show placements and commercials. Since then, Kyle has dabbled in long-form improv and audio production while performing weekend gigs with Kansas City cover band The Magnetics.