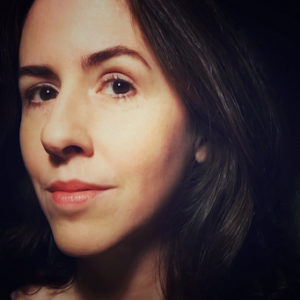 Nikolle Doolin is a voice actor and writer from New England. Originally, she trained as an actor for the theatre. She graduated from a performing arts school and then continued to focus on acting and writing during her studies at Harvard. There, she trained with actors and directors from the American Repertory Theatre and the MXAT Institute for Advanced Theatre Training. Her experiences in the theatre included: stage acting, directing, set construction, running crew, production management, and stage combat.

Her voice was often remarked upon as one of her greatest strengths, so Nikolle looked into voice acting. She received training for voice-overs at a professional studio and has performed for various mediums, such as: audiobook, podcast, e-learning, game, film, video, and radio.

Nikolle had the honor of being discovered by horror writer and voice artist Lawrence Santoro before his untimely death. He found her work online and invited her to narrate stories for the Tales to Terrify podcast, which he hosted. His enthusiasm and support for her work inspired her to do more and it acted as the catalyst for her participation in other podcasts.

That’s where David discovered Nikolle and he introduced her to The NoSleep Podcast. She’s glad that he did, as her experience with NoSleep has been very rewarding. The high production values of The NoSleep Podcast continue to delight Nikolle. The music and sound design never fail to amaze. She’s also impressed with the writers who provide her and her fellow actors with the opportunity to play a variety of colorful characters.

The NoSleep community is highly supportive and engaged. It is a special place for an artist to feel at home and inspires and nurtures creativity. Nikolle is grateful for all of the kind words she has received from NoSleepers and wants them to know just how much she values them.

Ultimately, other producers asked Nikolle to lend her voice to their podcasts. She has also performed fantasy stories for Far-Fetched Fables, science-fiction for StarShipSofa, crime tales for Crime City Central, and more horror for Manor House.

When Nikolle isn’t performing stories, she’s writing them. At Harvard, she studied writing and editing with professionals such as the senior editor of Masterpiece Theatre and the former editor of Agni. Currently, she writes fiction, poetry, and plays. Her work has appeared in the Wilderness House Literary Review, Tales to Terrify, 3:AM Magazine, 365 Tomorrows, Flashshot, and the literary anthology Wilderness House Literary Review – The Best of Volume 3. Additionally, her stage plays have been presented in festivals.