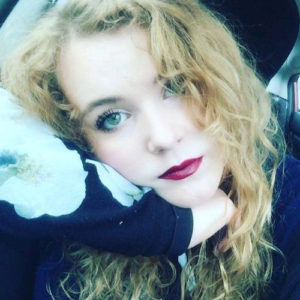 Addison was born in Atlanta, Georgia, but grew up in the beautiful Shenandoah Valley in Northern Virginia. She is in the process of earning her BFA in Musical Theatre from Shenandoah Conservatory, where she trains as an actor, singer, and dancer. Her special skills include yoga instruction, baby alligator impressions, and preparing the best brunch foods in town.

She loves storytelling in all of its forms, and has been telling stories as long as she has been able to read them. She used to spend long car trips reading to her parents from her favorite books, and stories she had written herself. This love of sharing stories, combined with a deep fascination with all things Horror, led her to r/nosleep (and, eventually, The Nosleep Podcast).

Though she is new to the voice acting game, she has already been thrilled with the variety of characters she has been able to play, from corporate professionals to drug addicts to concerned parents. She hopes that Producer David will someday find a story befitting her self-created character “Wisconsin Mom”, but acknowledges that perhaps Horror is not the genre that suits her best. If you bothered to read this, and made it all the way through, she would like to say: Thanks. I hope you have a really good day.

You can also find Addison talking about monsters, mayhem, and mothman on her creepy comedy podcast The Cryptid Keeper. Listen here.