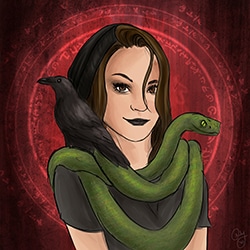 Ashley McAnelly is an 11th grade English teacher, writer, and NSP editor from good ole Arkansas. At the age of 11 she wrote her first scary story and continued to write dark fantasy and horror stories. Second year of college she earned her badge of stoicism when her fiction workshop classmates read her story and tore into it like Snackevoy tearing into a Snickers. From that, she learned the what and what not to dos of giving constructive criticism and made it a personal goal to always help other writers better their craft. This eventually led her to doing more editing than writing, though she is very much still writing, she swears.

She has had several stories produced on the NoSleep Podcast, “Gift Exchange” (S13 Christmas Episode), “Just Call Amy” (S14 E5), “Stand by the Tree” (S14 E19), and “The Paper Plate House” (S15 Christmas Episode). She is currently working on a full length YA Horror she’s hoping will see the light of day in the near future. Until then, she is wading through the ever dense submission inbox looking for the next NoSleep lineup–though if anything goes wrong, she still blames Jessica.