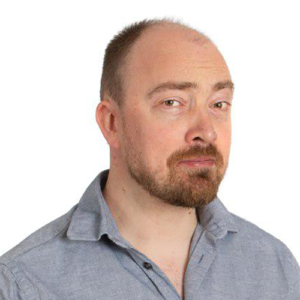 If you ask David what first attracted him to the audio realm, he’ll say the Hitchhiker’s Guide to the Galaxy, as he listened to – and essentially learnt by heart – the radio series as a child. Then once Doctor Who went off the air in 1989, he turned to audio to get his fix from Gallifrey. It was whilst looking for Time Lord-based audio drama that he came across audio groups online and decided to pick up his mic and have a go himself. In the fifteen years that have followed he’s played God, the Devil and many other characters that have an agenda or require mystery.

What is a mystery is how he started off with an astrophysics degree and then went to drama school, before being catapulted to India to perform Shakespeare for six months. Upon his return he worked as a storyteller, actor, science festival organiser and crossed North America exploring science centres, museums and planetaria. He’s now a maths and science tutor, and an astronomy talker for hire.

He has always loved ghost stories, and so when he stumbled across NoSleep he binge-listened and decided that he had to be a part of it. Luckily, his British accent was sufficiently distinctive that he was allowed to become part of the furniture, like a butler. They’re always British. The training in horror fiction has paid dividends for his work leading walking tours of his home town of Ripon, illuminating its darker nooks and crannies.

In 2013 he won the inaugural Best Actor award at the Audioverse Awards for his role as Byron in The Byron Chronicles and has played the lead roles in Colonial Radio Theatre’s releases of Moonfleet and War of the Worlds. He co-hosts the Sonic Society, a weekly showcase of new audio drama, and can now be found on Audible narrating the works of Idries Shah. He lives in North Yorkshire with his husband, and can still quote the Hitch-hiker’s Guide. Well, with a degree in maths and another in astrophysics, it was either that or back to the dole queue on Monday.