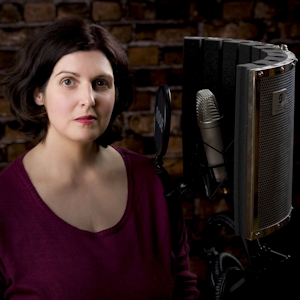 Erika is from rural Buckinghamshire, about halfway between Oxford and London in the UK. She trained in Acting Musical Theatre at the Royal Central School of Speech and Drama and works as an actor and director.

A love of playing character voices and happening to be in a production with fellow NoSleeper David Ault led to her introduction to the NoSleep podcast. Since then Mr Ault has played her lover, husband, stalker, and has murdered her on more than one occasion. One day she hopes to get her revenge…

In the meantime, she is delighted with the regular challenges producer David Cummings throws at her in terms of her playing age range and accents. So far she has provided voices from young children (boys and girls) to ancient demons, and has played a variety of English, American, Irish, Scottish, Iraqi, Iranian, Russian and Australian characters to name but a few. Mr Cummings once said he was going to find a story that included a Peruvian soothsayer, just to hear what that would sound like. Erika has already started to prepare for this role by wearing a poncho and keeping a llama.

Her biggest confessions are that she sometimes gets scared recording her own stories and likes Star Wars. A lot.