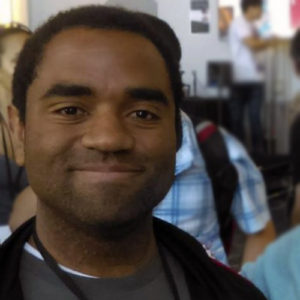 Hasani Walker is a native of Phoenix Arizona who moved to Portland Oregon to work on films like “Missing Link” with Laika Studios and the Adult Swim show “The Shivering Truth” at Shadow Machine. A lover and creator of animation, he dedicates most of his time to refining his skills and seeking work at various studios.

For years Hasani has produced a stop motion horror series on YouTube called “My Bedroom Door” about a strange door that appears in a girls room at night. As the story continues the door proves to be a haunting presence with bizarre effects on anyone he comes across it. Each episode is a solo venture with puppets, sound, animation, editing, and everything being done by him. So far the series has over twenty entries online and a small following.

Along with the webseries, Hasani keeps busy with his other hobbies, writing books, sculpting, illustrating, and baking.