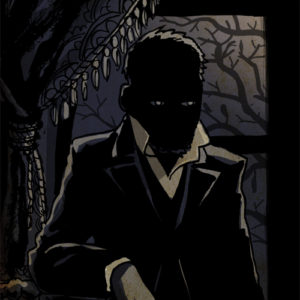 Łukasz Godlewski was born in Gdańsk, Poland in 1883 or a century later, the documents are unclear about this. In his teenage years his future was uncertain. Trying diffrent schools and studies he felt out of place and out of time until he stumbled upon the works of his soulmate, H.P. Lovecraft. Godlewski’s mind nor sanity was ever the same again.

Łukasz was creating art from his earliest days but it was never fully understood. To this day people are treating it as an abomination, often referring to it as, “a creation of a sick mind”. The artist himself declares he will be appreciated after his death when the Earth will stand still.

He tried his skills in the medium of comic books ceasing only because the eyes of readers were bleeding. However, Łukasz has not finished with creating comics and he is constantly working on new projects while dreaming nightmares.

Recently his hollow, tormented soul has found relief in creating illustrations for The NoSleep Podcast, a haunted place for those who seek fear, horror, and pain.