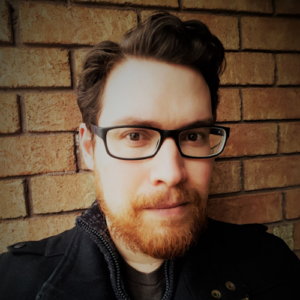 Matt Bradford is a writer, editor, and voice-over actor based out of Barrie, Ontario (Canada) who’s fondest memories include staying up late to watch Tales from the Crypt as a kid and falling asleep to Art Bell throughout university.

After graduating from Ryerson’s Radio and Television Arts program in 2004, Matt worked at radio stations across Canada before falling for a news announcer, getting hitched, and starting a family. Now a freelancer for six years and running, he pays the bills as an editor for industry magazines, a writer and researcher for Guinness Book of World Records, a pen-for-hire with multiple Toronto clients, and a voice for Vox Talent.

In his free time … (wait, I get free time? When?) … Matt enjoys teaching his son the finer points of video gaming, running / wheezing, Netflix binging, escape rooms, and co-hosting two weekly podcasts, Video Game Outsiders and ZombieCast. Oh, and of course lending his voice to the amazing stories on the No Sleep Podcast. That’s, like, number one.

Matt joined The NoSleep Podcast in 2016 and is pretty sure his friends and family are getting a little annoyed with how much he talks about it. And with another kid on the way, he’ll soon be bringing an extra level of exhaustion and paranoia to his reads. In the meantime, you can find him on Twitter at @MattoMcFly.