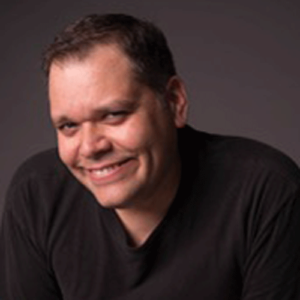 The entity that calls himself Mick Wingert has existed on the mortal plane for more than four decades. Besides planning the fall of mankind and new recipes with which to sauté humans into tasty snacks, Mick can be regularly heard on some of the video games, animated programs and movies you have seen in the last 10 years.

Highlights include: Po, the panda on the Emmy® award-winning Kung Fu Panda: Legends of Awesomeness, Iron Man in the Marvel Animation universe, Kane in TitanFall 2, Raphael in Teenage Mutant Ninja Turtles: Mutants in Manhattan, as well as various characters in Murdered: Soul Suspect, Fire Emblem Heroes, Batman: Assault on Arkham and more. In 2017, Mick also became an official cast member of the ‘ArrowVerse,’ voicing the character of Vigilante on the fifth season of Arrow on the CW.

Mick currently haunts and terrifies the residents of Southern California along with his blood bride and their two spawn. Should you encounter Mick Wingert in the wild, DO NOT engage. Pretend to be dead until he looses interest and then immediately call your priest, rabbi or clergyman for assistance.