Whenever authors ask me for writing advice, one of the first things I tell them is to read a lot. And not just in your chosen field either. Reading a wide cross-section of genres and styles will always help improve your craft. In fact, reading outside of your comfort zone can often help you to bring new ideas and approaches to the table in your own writing. I've compiled here a list of thirty short stories (admittedly one of which stretches the definition of 'short'). All of these are supremely excellent tales, and I believe that every one of them has something unique to teach when it comes to constructing narratives. I've taken care not to focus solely on horror, although there are plenty on the list that belong in our little corner of the literatureverse. I'd recommend that everyone with aspirations to write for the podcast - whether newcomers or returning authors - check these stories out if they get chance. Everything on the list is available to read online for free, with links provided in this post.
18 December, 2018

Greetings, Sleepless. Olivia here, back from the dead like a zombie with unfinished business.

As many of you know, a couple of weeks ago the NoSleep Podcast team performed a fantastic sold-out show in Toronto! I couldn't attend because I was off taking part in dark and sinister rituals for unspeakable reasons, but we sent along our intrepid reporter, aka Community Manager Krista Neubert. During her time with the cast and crew, she wrote this blog to give us an insight into the horrific goings on behind the scenes of our beloved podcast! And she took photos. Lots of photos. Photos I captioned which I'm sharing with you now in case a mysterious agency tries to erase me from existence. It happens more often than you'd think.

So without further ado, here we are with the first of Krista's guest blogs, which I have puntastically titled... Community Mismanagement. 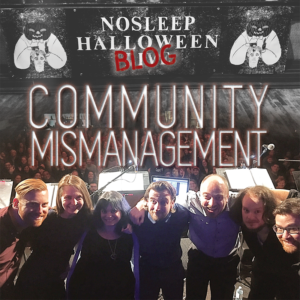 We’re five days into October now. Already across the community I’m seeing a vast amount of Halloween preparations. Movies are being selected, costumes are being designed, virgins are being sacrificed to dark ancient gods, candy is being bought. It chills my already frozen heart to see so many of you getting into the spirit of dread and panic.

Over at The NoSleep Podcast HQ, they’re obviously preparing for the live Halloween show, and the special Halloween episodes, but more immediately they’re gearing up for the release of Episode 22 this coming Saturday/Sunday. I broke into David’s office in the dead of night to see if I could steal some exclusive, never-before-seen information about the upcoming episode.

I managed to discover the following: It has some stories in it. They are horror stories. They are performed by some narrators.

Nobody tell David I’ve leaked this information. I’ve heard the punishment for giving away NoSleep Podcast secrets is severe. But then, he’d have to identify and catch me first.