We’re five days into October now. Already across the community I’m seeing a vast amount of Halloween preparations. Movies are being selected, costumes are being designed, virgins are being sacrificed to dark ancient gods, candy is being bought. It chills my already frozen heart to see so many of you getting into the spirit of dread and panic.

Over at The NoSleep Podcast HQ, they’re obviously preparing for the live Halloween show, and the special Halloween episodes, but more immediately they’re gearing up for the release of Episode 22 this coming Saturday/Sunday. I broke into David’s office in the dead of night to see if I could steal some exclusive, never-before-seen information about the upcoming episode.

I managed to discover the following: It has some stories in it. They are horror stories. They are performed by some narrators.

Nobody tell David I’ve leaked this information. I’ve heard the punishment for giving away NoSleep Podcast secrets is severe. But then, he’d have to identify and catch me first.

Moving on, I caught up with fan-favorite author S.H. Cooper today, and asked her to provide a quote for this blog. This is what she had to say:

“I just read something about homework online and then got worried I forgot to do my homework, but then I remembered I’m almost 30 and haven’t been in school in ages. But yeah, go with “What kinda quote”.” – S.H. Cooper, 2017

Chilling. Look out for more terrifying insights into the minds of The NoSleep Podcast’s best and brightest as this blog continues! 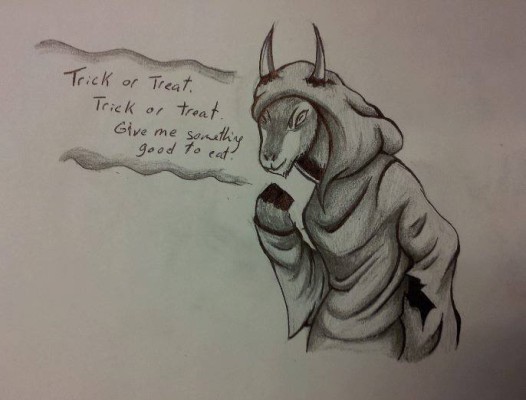 A drawing by author Manen Lyset based on his story, “My friend learned the hard way to not answer the door to late night trick-or-treaters“

Speaking of the best, there’s another exciting date to look forward to this October besides Halloween. This October 13th lands on a Friday, and of course there’s a bunch of cool horror stuff being released on that day. One such thing is The Evil Within 2, a survival horror video game from Tango Gameworks and Bethesda. The first game was reportedly excellent, although shamefully I haven’t properly played through it myself, so I figure I’ve got 8 days to do just that in preparation for the sequel.

If you fancy something a little more grounded in reality, The Painscreek Killings recently came out, which is a murder mystery adventure game set in a small town in the 90s. As a journalist, it’s your job to uncover the truth behind the murders and publish them in the paper. It looks excellent, slow-burning and mysterious, and I’m looking forward to playing through this one too.

So with my horror video game gushing out the way, it’s time to check out a book! Vices and Virtues, a recently-released horror anthology, contains the work of many popular authors from r/nosleep, including a few names you might just find familiar from The NoSleep Podcast. Go check it out, curl up under a blanket and read your way through October.

Anyway, I can hear someone coming down the hall now. I’m currently holed up in one of The NoSleep Podcast’s offices, writing this on someone else’s computer after I unsuccessfully tried to uncover a sinister conspiracy involving Erika Sanderson. I’ve no idea if any sinister conspiracy involving Erika Sanderson even exists, but I figured it was worth a shot. Time for me to duck out and hide in the closet until whoever it is goes away.

Oh, one last thing! If you’re a horror artist, I’d love to showcase your work in this blog! So if you have one or more cool pieces of horror art you’ve done, please email me at olivia@thenosleeppodcast.com or hit me up on Twitter @owlcavedev and I’d love to feature your art (fully credited) in a future blogpost. Don’t be shy! Show the world your terrifying talent!

Catch up with you all later, Sleepless!