Hello, Sleepless! Here it is, the big day! The day we’ve all been waiting for. The ghouls, the specters, the undead, the people who love the things that go bump in the night. Today is Halloween, the day when us horror fans can let our fear flag fly. Whether you’re carving and displaying pumpkins or placing skeletons in your garden, this is your day. It’s like Christmas, but with more dismembered body parts and blood. And without the presents.

We should do that, actually. Pioneer Halloween gift-giving. It’d be awesome if we exchanged gifts like we do at Christmas, but they were all horror-themed! ‘What’s in the box?’ Oh it’s a severed head! Next year, let’s do a Secret Satan for Halloween!

Moving on, IT’S HALLOWEEN! So naturally, we at The NoSleep Podcast have a lot of cool things for you. The big one, of course, is our free Halloween episode, released today and available for everyone, season pass member or not. Coming in at 2 hours 35 minutes, it’s a cavalcade of cadavers with four stories by four authors; S.H. Cooper, Michael Whitehouse, Jacob Healy and some unknown called Olivia White who I’ve never heard of.

We also have the Season 9 finale available to all, featuring a single epic story by Jared Roberts called The Hidden Website. If you haven’t heard it already, which you probably have cos you’re all eager zombeavers, go give that a listen. Then listen to the Halloween episode!

There will, of course, also be a Halloween bonus episode for Season Pass members as usual, details of which I haven’t been able to torture out of David at this time.

As you may know, we had a live show in Toronto on October 29th, which was a resounding success. David Cummings, David Ault, Peter Lewis, Jessica McEvoy, Nichole Goodnight, Matthew Bradford, Jeff Clement and Brandon Boone were all in attendance, and they gave it their most horrifying all, scaring and shocking the audience to provide a wonderful, memorable night of fear. But you know what’s sad about that? It’s over. It happened. If only there was, I dunno, an upcoming live tour again… 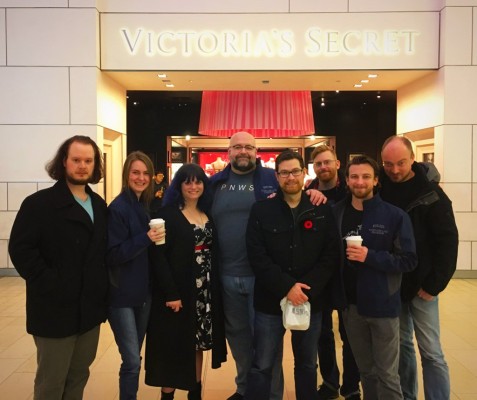 The NoSleep Podcast team on an important mission

SLEEPLESS, GET READY FOR THE NOSLEEP PODCAST LIVE TOUR 2018. I’ve already seen plenty of buzz around it, so I’m sure most of you know already, but in case you don’t, dates can be found on the website. Are you going to be attending? Why not head over to the Facebook fanpage and let us know!

If you like horror video games and wanted to spend tonight playing something scary, I’ve got you covered. Over on The Telegraph, in my other job, I’ve written a list of some of the best horror games from the last 12 months which you could check out.

What are your plans for Halloween, Sleepless? Hit us up on Facebook or Twitter to let us know. Tell us what scares you have planned. Send us photos of your pumpkins. I’m going to carve some pumpkins in a minute! Five, to be precise. I need to hang my horrifying ghoul up in the window too. Halloween! Busy! Perhaps I shall be back later with some Halloween night updates, but for the meantime, stay sleepless, brace yourself, and GET READY FOR ALL HALLOW’S EVE.