Journey into the Manenverse: Part 2

19 Apr Journey into the Manenverse: Part 2

Posted at 16:12h in Blog by Manen Lyset 0 Comments

Manen again, here to promise you Olivia is still perfectly fine. Those screams are just her showing her enthusiasm about summoning Lord Venerendum.

Quick recap: today, we’re continuing the adventure into The Manenverse, and following Will Grant as he totally deals with getting his butt handed to him in a completely reasonable and mature manner.

This is part 2 of 4, and before each part, I’ll list out any related stories. While I don’t think you need to have heard/read them to follow, the series might be more enjoyable if you know who’s who. It’s kind of like starting a sitcom from season 2 and missing the inside jokes carried over from season 1: you don’t need them to enjoy the show, but it can heighten the experience.

William Grant limped into Bare Assets Exotic Cabaret and marveled at the clean, well-lit lounge with walls draped in burgundy curtains that parted near the center of the room to make way for a wide stage and catwalk. It was mid-day, so the cabaret was still closed to patrons. In the past, it would have been open all day, but that had changed along with the change in management. Madame Sherbert, the owner, stood at the end of the walkway, twirling a large pendant between her fingers. 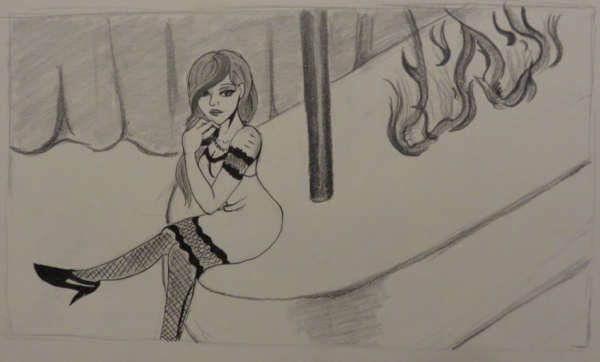 The ghostly figure of a fat, mustachioed man wailed silently at the order. He was covering his chest and stomach with his arms, as though trying to hide the dim, putrid greenish-brown light emanating from the core of his intangible body. Madame Sherbert tapped her foot on the ground impatiently. Her pointed stiletto produced a loud click despite its minute surface area. The ghostly form jerked up, as though in fear, and then began stumbling around the stripper pole like a toddler taking his first steps.

Will removed his trilby politely and pinned it against his chest. It was a new one, not nearly as comfortable or as classy as the one that had gotten pecked to bits by those feathered pests, but it did the job. Hatters these days paid very little attention to detail, opting for mass production rather than quality. Maybe he’d find an old hat in a vintage shop one day, but until then, his cheap replacement would have to do.

Sherbert, not even turning to face him, spoke first, “As I live and breathe, if it isn’t Mr. Grant. I never expected to see you around these parts again. Not after what happened last time.” She played with her necklace, making the ghost-like apparition on stage disappear.

“Well, you know, I figured it was all water under the bridge. We’re both reasonable, rational-minded adults, are we not, Madame Sherbert?”

She turned to face him, arms crossed, and stared with a spiteful gleam. “You stole three of my new dancers.” 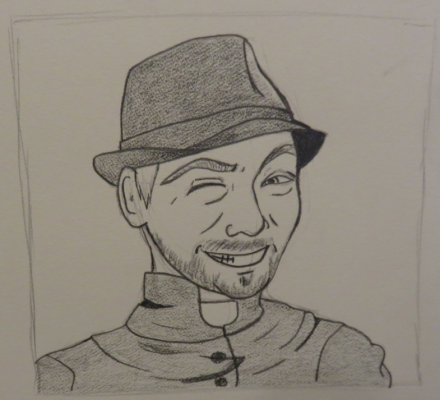 “How was I supposed to know you’d marked those sailors? They were being rowdy. When I took them to bed, I assure you, I merely intended to unburden your fine establishment. It was a simple misunderstanding. Have I mentioned how lovely you look today? You’re positively glowing.”

Madame Sherbert seemed unimpressed. “Flattery will get you nowhere.”

William chuckled. “Oh, I quite disagree, Madame Sherbert. Flattery has gotten me inside of many things.” He winked.

She reached for her necklace, and William felt himself tensing. The fear of entrapment had never once crossed his mind before, but after his run-in with Darlig, he found himself feeling a bit vulnerable. A silver tongue wasn’t much of a weapon against the pig-headed.

“Do you know what might get you somewhere? If you ‘bare it all’ for me. Mm?”

He smiled nervously, “I’d love to, but I don’t think I have the ‘proper equipment’ for you. Can’t see a person’s soul if he doesn’t have one.”

Sherbert turned on her heels. “Hmm,” she uttered pensively, caressing the necklace in small, circular motions. “So, what happened to you? You’re looking a little worse for wear these days.”

Will exhaled the deep breath he’d been holding. “Goodness, is it that obvious?”

“Well, you are limping,” she glanced at him from over her shoulder, “and you have that beaten puppy-dog look in your eyes. It doesn’t suit you.”

“Your sense of perception is as keen as your sense of style, Madame Sherbert. You are truly a specimen of outmost class, poise, and dignity,” he answered.

“And you’re an insufferable flirt. Now tell me, before I change my mind and our ‘water under the bridge’ evaporates, mmm?”

He stiffened. “Yes. Yes, of course. You see, I’m afraid I had a bit of a run-in with a foul little creature. I was brutally attacked! Unprovoked! And, of course, being the kind-hearted, benevolent, ruggedly handsome gentleman that I am, I thought I might let bygones be bygones, but,” he wiggled his wounded leg, “I’m afraid the damage might be permanent. It’s hard to forgive and forget when the knife is still in your back, is it not?”

She leaned against the foot of the catwalk, staring at him with amusement rather than sympathy. “I see,” she answered dully, “So why did you come here? What do you want from me?”

He gasped and placed a hand on his chest, “I’m hurt you would think I had ulterior motives in coming to visit you. Why, I just wanted to see a friendly face.” 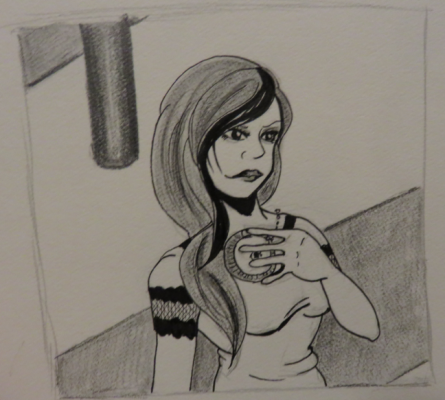 She stared at him knowingly. “You wanted my amulet.”

He lifted his hands defensively, “Please, I would never dream of asking you to part with it.” He took a step closer. “But perhaps I could just,” he reached for her hand, “borrow it? Temporarily?”

She plucked her hand free and snorted as she tucked the necklace safely into her shirt. “Not a chance.”

If he needed to beg, he was going to beg. He brought his hands together and locked eyes with her. She tried to dodge his gaze, but he shifted left and right to meet it every time, until she gave up and simply looked back.

“Please,” he uttered, “Please you’ve got to help me. I’ll make it worth your while. How would you like another wish granted? This time, no charge! Consider it payment for lending me your amulet.”

His hands waved broadly at the room around them. “But look at all I’ve given you with just a single wish. Imagine how much more you’d have if you would just-”

She thrust her index finger firmly against his chest, putting an uncomfortable amount of pressure against his sternum. There was a lot of force behind that single little digit, like a crocodile bite without the lower jaw to finish the job. 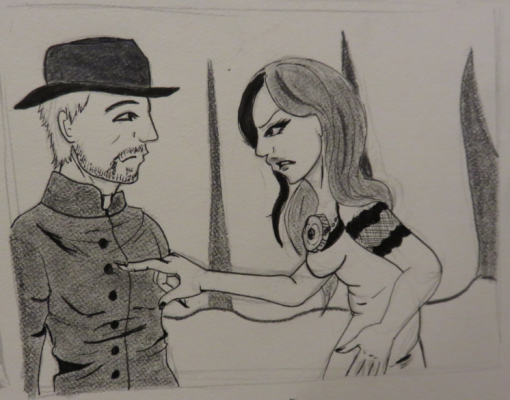 Holy cow, Manen cannot draw women to save his life.

“You didn’t give me all this,” she hissed, “This. All of this. This was me. You just repaired the amulet, that’s all. Don’t flatter yourself.” She pulled her finger back and let her hand fall to her hip. “If you’re that desperate for help, why don’t you ask the big guy?”

If she thought he had a direct line to the king of Hell himself, she was sorely mistaken. He was to the Prince of Darkness what debt collectors are to the police: loosely connected, in that they both work to reclaim lost goods, but two very different animals in every other sense.

She tapped her foot on the ground. The hourglass of her patience was trickling down to its final grains.

“You know a lot of gigantic blue demi-Gods? Big Blue. There’s just the one,” said Sherbert.

It clicked. Thank goodness, it clicked. Yes, of course: she was referring to the one who called himself ‘Leviathan’. No, no, not the giant sea dragon. That had been a gross misinterpretation, kind of like how colonials misunderstood the word “Canada” to mean the country, and the name stuck. Mortals can be so stupid. Leviathan was an ancient entity so old, he’d likely ridden dinosaurs in his infancy. He might even have crawled out of the primordial waters along with the first fish. While many modern languages had Latin roots, he had been the one to seed Latin’s roots. He was old. He was wise. He was wickedly powerful, but he was also…

Sherbert beamed. “You hadn’t heard? He escaped a few months ago.” She paused to think. “Well, I suppose ‘escaped’ isn’t quite the right word. I’m sure he could have left any time he wanted. I suppose even ancient demi-Gods like to do a bit of people-watching from time to time. It’s like reality TV, but live and uncensored.”

“Blimey! Do you know where I can find him?”

She shrugged and tapped the medallion hiding beneath her shirt. “Hmm, if I were to wager, I’d say he’s probably at the best place a colossal demi-God could go to hide from prying eyes: the Black Forest.”

“Germany?” If he’d been trapped in an underground lab for months, he’d rather go enjoy a beach somewhere warm, but to each their own. Will smiled broadly.  “Thank you, you beautiful mistress of beauty, you!” He limped to the door, stopped, and looked back. “I owe you one!”