Journey into the Manenverse: Part 3

20 Apr Journey into the Manenverse: Part 3

Posted at 19:17h in Blog by Manen Lyset 0 Comments

This is Manen Lyset ridin’ the textwaves. Eh? What’s that? You don’t hear Olivia screaming anymore? Oh, I know. That’s totally normal. This is the part where she’s submerged into a vat of goat’s blood. If you listen carefully, you might hear a few gurgles. She’s fine, don’t worry.

Quick recap: we’re again continuing the adventure into The Manenverse. Will Grant has a new target to help him get revenge, and he’s on his way to meet him.

This is part 3 of 4, and before each part, I’ll list out any related stories. While I don’t think you need to have heard/read them to follow, the series might be more enjoyable if you know who’s who. It’s kind of like going to your friend’s birthday party and meeting a mutual acquaintance; you don’t need to have SEEN Chad get so drunk he jumped off the second story window and into the kiddie pool to know it was funny, but if you did, that just makes meeting him all the sweeter.

William Grant followed the footpath through the so-called ‘Black Forest’. What a misnomer, he thought. In actuality, it was much greener than black, with a canopy of tall, emerald trees spreading as far as the eyes could see. Anything not covered in leaves was covered in moss, also green. Perhaps the name alluded to the darkness that resided deeper within, where people rarely ventured, and the few who did rarely returned. The Black Forest was the birthplace of many dark creatures, some of which migrated to sew their seeds in far-off lands, others which remained to this day, trotting between the trees, waiting for their next victims. They had better not mistake me for human scum, he thought bitterly. He’d not appreciated his run-in a few years prior with the Norwegian troll who’d clubbed him from behind and dragged him to his cave to make a meal out of him.

Water under the bridge.

Where there had been another troll with another club.

That hadn’t been the best day.

The hike through the Black Forest was tough going: the moss was slippery, the tree roots kept cutting through the earth and blocking the way, and his limp slowed him tremendously. The one good thing, he supposed, was that the hiking trail seemed vacant, except for the occasional woodland creature peeking at him between the thick foliage. It was likely everyone had stayed home, watching the heavy rainfall that had been coming down in sheets and was predicted to do so for the rest of the day. That was fine by Will: Hell forbid he’d come across someone with a wish to grant. He didn’t have time for a game of cat and mouse. There was a much larger, much more ferocious rat he needed to catch first.

He wasn’t sure where or how to find him. One would think a giant blue man would be easy to spot, but one would be wrong. Big Blue – Leviathan –, whatever you wanted to call him, hadn’t eluded sightings for thousands of years without a few biological advantages at his disposal. William had heard a lot of theories on how he’d done it: he could shrink to the size of an atom, make himself invisible, turn into mist, change his skin color to match his surroundings like a chameleon, and the most amusing theory of all, he was a literal alien that could beam up to his mothership at any given moment. How did he hide the mothership? Well, some say it could shrink to the size of an atom, make itself invisib…

It was the rain that gave away Leviathan’s position. If it hadn’t been falling so hard, Will might never have spotted him amidst the forest. It was subtle, but something didn’t sit right in the way the water trickled down and around an unseen oval-like shape hovering just above the treeline like rain down a window. It formed the subtle outline of a colossal head, whose direction was only distinguishable by the triangular protrusion coming out of it. His nose, no doubt.

In his condition, William wasn’t looking forward to trying to climb a tree to get his attention. Thankfully, he didn’t need to. The invisible head slowly turned towards him, and a cloud of mist escaped his unseen lips as he let out a slow, audible exhale that sounded like the howl of the wind. It coated the area in a hot and humid miasma. It wasn’t the worst Will had ever smelled, but he’d definitely be cleaning his clothes tonight. Twice.

As the rest of the world fell out of focus behind the barrier of mist, Leviathan’s form became clearer. He was more blue than anything else, but his body was dotted with brownish leopard-spot bumps going up and down his torso, head, arms, and legs. Their size seemed fluid, shrinking as he became more visible. The colossal creature approached, each heavy footfall making the ground tremble and the trees shudder away another layer of water, like shaking an umbrella before getting on the bus. Once he was close enough, he dropped to his rear with a thunderous ‘thud’ and focussed his square pupils and yellow eyes on William Grant. 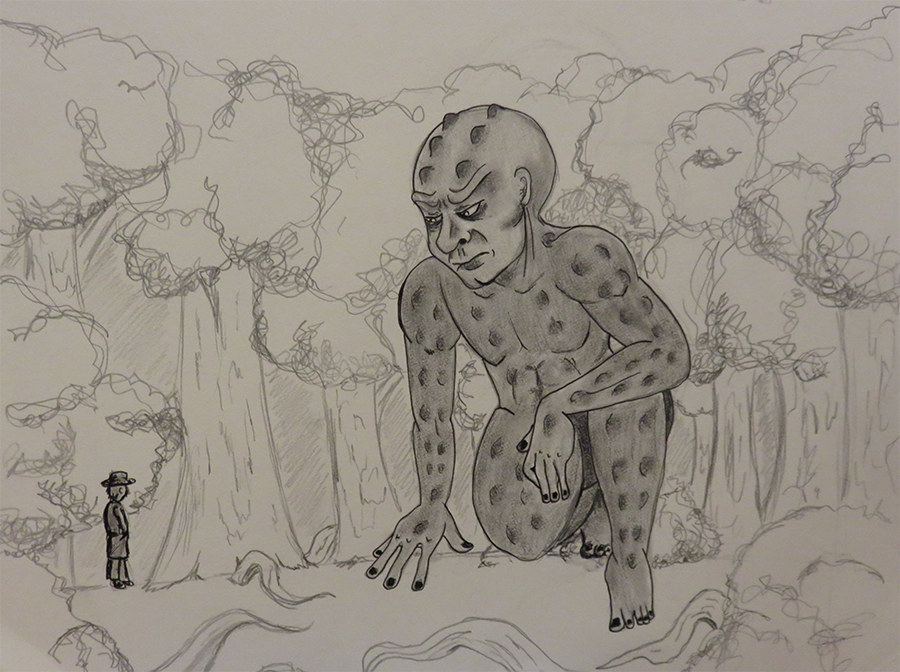 Will hadn’t expected him to be so big. Even seated, Leviathan’s head almost reached the top of the trees. Will adjusted his collar.

Unsure how to best address the monstrosity, William uttered a nervous, “’Ello chap.”

The booming voice sent birds flying off in all directions.

Well, this isn’t off to a great start, thought Will. He’d just have to do what he did best: charm him. It couldn’t be that hard, could it? Leviathan lived a solitary existence; surely he wasn’t used to being flirted with? Surely he’d enjoy a good stroking?

“You know, you’re quite,” he eyed him top to bottom, taking in his muscular form in detail, “imposing, aren’t you?” He let out a nervous laugh. “I mean that in the best possible way, of course. One wouldn’t want one’s demi-God to look soft, would one? No. Certainly not. And you, well, you certainly command respect. I, for one, respect you greatly. I’ve heard stories of you. I must say, I’m quite the fanboy.” He grinned ear to ear and made himself blush on cue. 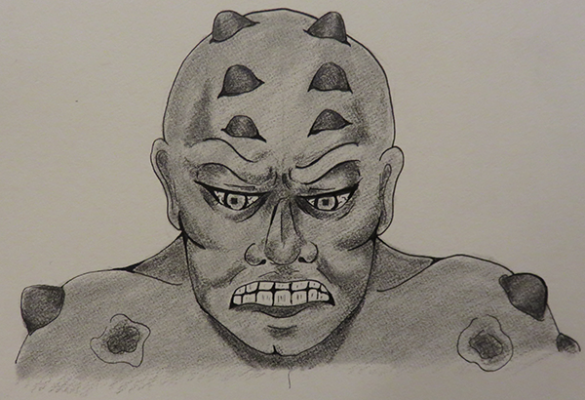 Will shifted his weight to his injured leg, but quickly shifted back once he was reminded of why he’d been keeping the weight off it. “Look, Levi- mmm, may I call you Levi?”

“Splendid, Levi it is.” He brought his hands together. “I was hoping that you, in your infinite wisdom and,” he paused, searching for his words, “charisma? Would be willing to hear me out? And may I say, your spots are looking quite lovely today, good sir. I find myself having to tell my heart to be still, alas, it will not obey.”

Will understood a few words here and there, but barely.

William lifted his hat to brush a hand through his thin hair. “Dear me, would you mind speaking English? I’m afraid my super-ancient-pre-Latin skills are a little, uh, rusty.”

Eh. He could understand the gist of it. Hopefully enough to have a peaceful exchange.

Will replied, “Why did I come? Okay. Well, I came to ask you a favor.”

“You don’t grant favors? Perhaps we can bargain, then?” He didn’t have much to give, but he could grant virtually anything. Sort of.

Levi’s eyes narrowed. He seemed to be considering the offer, but for all Will knew, he was trying to remember what to put on his supernatural shopping list. Finally, he replied, “Insektum non mihi dare! Seckt vickdente yoouvat et deficiente, et spretchen.”

“Thank you. Okay, you see, there’s this other demon. His name is Darlig. He’s a crow who kills-”

“Yes of course you’ve heard of him. He probably comes from one of yours. My deepest apologies, how silly of me.” He stuttered. “Well regardless. He wronged me, you see. And I was wondering if you,” his expression grew cold and angry, “would grant me the power to utterly obliterate him?” He smiled and lightened up. “You know, an eye for an eye. Oh, I promise I won’t actually kill him.” He grew cold again. “I just want him to suffer as he’s made me suffer. I’d like to chop off one of those wings of his and stuff it down his throat.”

“Yes, yes. I KNOW I should handle it myself, but as you surely know, my powers are kind of limited. I’m not one to ask for help, honest, but I could really use a hand, oh exalted one. Would you, please?”

Levi’s arm rose, and Will braced himself for a hit that did not come. Instead, the giant bore his square, wood-like teeth and brought his wrist to them. He stared at William for a long, quiet moment, before his teeth parted and shut in a quick motion. Levi snapped his head back sharply to finish the job. The massive hand fell lifelessly at Will’s feet, meters from the hiking trail. 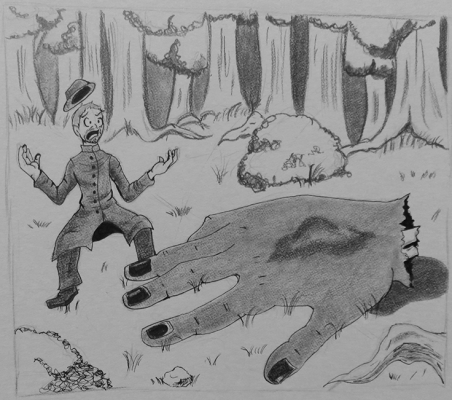 “Bloody hell!” screamed William, in a mix of shock and surprise. “I didn’t mean your literal hand!”

Blood gushed out of Levi’s stump as he stared unblinking at Will. The giant’s shoulders heaved up and down and he began to let out these odd, deep gasps for air. Was that supposed to be laughter? William couldn’t tell.

“You know, I was thinking something more along the lines of, oh, I don’t know, giving me the ability to grant my own wishes?” Will bellowed.

“Eh? A weapon? You know, I’m not really big on physical violen-”

There came a growl so loud, the trees bent from its force.

Will stiffened. “SPLENDID. Yes. A weapon would be perfect. Thank you, o great one! Where might I get said weapon?”

Levi’s eyes trailed to the severed hand. Will’s nose curled in disgust. How was he supposed to use a giant severed hand, exactly? He couldn’t even lift it on his own.

“You want me to make a weapon out of that?” He looked at the hand, face contorting.

It was so barbaric. He had half a mind to drop the matter and walk away, but it wouldn’t be wise to refuse a gift from a demi-God. Leviathan watched, like a wolf stalking its prey. He said nothing, he did nothing, he simply stared Will down. William had no choice: he was going to have to take something and be grateful for what he got, lest he offend him.

“You uh,” he tugged on his collar, “you truly are a great and benevolent ruler. I shall owe you tenfold. Should you ever need a wish granted, do call upon me and I will ensure you’ll get your heart’s desire.”

Will gave him a nervous thumbs-up as he knelt by the severed hand. There was a piece of bone sticking out. He thought about the shard of silver in his thigh, and where that shard had come from. A dagger, he smirked as he broke the bone free from its still-warm, fleshy prison, I’ll make a dagger out of it. Eye for an eye, Darlig.

William staggered away from the hand, holding his prize between his fingers. “I cannot thank you enough, you handsome devil, you. I promise you, I’ll put this to good use.”

He twirled it around in his hands as he took slow and cautious steps away from the monstrosity. How does one end a conversation with a demi-God, anyways? As awkwardly as one begins it, of course.

He turned on his heels and hurried back down the path. In the distance, he heard Leviathan’s thunderous voice booming through the curtain of mist.