Happy Sunday sleepless! Gabrielle Loux speaking. You may remember me from my interview with Olivia a few weeks ago, or you may already know me from submitting, or you may have seen me haunting Twitter. I come bearing an interview with regular NSP author Henry Galley.

Henry is a British author who first appeared on The NoSleep Podcast in season six with “They Move Through the Trains“. I’ve had the pleasure of working with him on several of his stories, and also the upcoming podcast Congeria. Some of Henry’s notable podcast gems include “Two Facts You Should Probably Know“, “In My Line of Work“, “Midnight Rendezvous“, and a brand new tale on today’s episode called “Duplex“, available for free to all listeners.

Henry recently started studying creative writing at The University of East Anglia and I can’t wait to see where his studies take this already incredibly talented young author.

Recently I had a call with Henry in which we talked about a variety of things including writing, podcasts, horror, and his future ambitions. I’ve transcribed it below. Let’s get started!

Gabby: You recently started your creative writing program at The University of East Anglia, how is that going? Have you learned anything you want to immediately start incorporating into your writing?

Henry: Yeah, I’ve really enjoyed it. And to be honest, a lot of it is just being reminded of the little things. I feel like when you write a huge amount of stories, naturally a some points you end up getting a little bit sloppy – a little bit lazy. I feel like there are definitely times where I’ve fallen into cliché a little bit. And this course has helped remind me not to use literary clichés and kind of those lazy little shortcuts – things like that.

G: How did you first discover NoSleep and The NoSleep Podcast? What was your very first story on both the subreddit and the podcast?

H: I was a fan of The NoSleep Podcast long before I ever even dreamed of having a story on it. Quite a few years back, I got really bored, I just googled things like “Top Ten Scariest Podcasts” and I noticed NoSleep coming up quite a lot. I think it might have been in like season five, around then? And I listened to it for a few months. And then it was in season six I got my story “They Move Through the Trains”  picked by David [Cummings], and narrated by David Ault.

G: What was the first one you ever posted on Reddit?

H: It was this story called…god, what was the name? “The Murders at…something…Lodge”, it was based on the Hinterkaifeck murders in either Germany or Austria, back in like the early twentieth century. Probably really lame if you read it these days, but you know everyone has to start somewhere.

G: What’s your favorite story you’ve ever had on the podcast?

H: Oh, god damn, that is a good question. I think it’s got to be – and this is probably not a surprise to anyone – it’s got to be “In My Line of Work”. Nichole, David, and Elie absolutely knocked it out of the park with that one and “boner dethroner” has really gone down in history since then.

H: That will be on my epitaph.

Henry, shortly after becoming a Kingsman

G: If you were to have any one of your short stories turned into a short film, which one would it be, and who would it star?

H: Oh damn, check out Gabby with the questions. God, there’s so many. A lot of mine probably wouldn’t make great short films because they’re very strange and the narration is a big part of it. But I would love to see someone try to make “Midnight Rendezvous” into a short film. Just because I think of all my stories that one is the most visually fun, with the monster game show and everything.

G: You have to pick actors.

H: She’s a big monster, so maybe like Tara Strong voicing her or something? I’m sorry that’s a really crap answer.

G: No! I love Tara Strong. Were you a huge fan of podcasts before you became popular on NoSleep? What are your…some of your…wow, I must have been drunk when I wrote that. What are some of your favorites besides NoSleep? And don’t say Congeria because I’m getting to that.

H: I was a huge fan of podcasts. I think, like ninety percent of the planet, my introduction to podcasts was probably Welcome to Nightvale. That’s the gateway drug. But now I like such a huge diverse array of podcasts. I love Addison an Alex’s podcast The Cryptid Keeper, I love Alice Isn’t Dead, I love This Paranormal Life and The Truth is one that’s really underrated, but it’s a fantastic podcast that more people should listen to. I’m also enjoying Dan [Zappula]’s new podcast, The Death of Dr. John Parker. That one’s quite new.

G: We have to talk about Congeria.

G: I talked about Congeria in my interview with Olivia so I feel like it would be weird to talk about it again, but also weird not to because we work on it together.

H: Yeah, it’s true, it’s the elephant in the room.

G: I feel like you’re kind of the unsung hero of Congeria, because not only do you head up our writing team but you’re also the co-creator, and you came up with most of our characters.

G: I won’t ask you to go too in depth, so we don’t spoil anything, but tell me a little bit about how Congeria came to be.

H: Congeria came to be through a drunken conversation with my co-creator Atticus Jackson. I think it was late at night for him, and he’d had a few. I’d just woken up so I was kind of like in a daze, and he was like “Ah, Henry, we’ve worked together for a while, we’ve done collaborative narrations and stuff since “My Grandmother’s Doll”, we should make a podcast.” And at the time, I was in the process of changing degrees, so I had shit-all to do. So I thought, ah yeah, that sounds like a really great idea. And we never expected it to snowball into this huge thing. We wrote two spec scripts and then we thought, well, if we’re gonna do this whole thing we’ll need more writers. So I contacted you and Max, and you guys have naturally been worth your weight in gold in putting this together. Atticus has done such a stellar job on all the editing, and it’s just turned into this amazing, terrifying, fast-moving behemoth that requires all of us to keep it in control.

G: I know, the closer we get to February the more emotionally unstable I’m becoming. 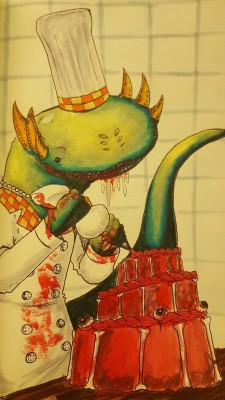 H: Yeah, I don’t know what other capacity I’d be involved with a book in. But, I feel like it makes the most sense for me, probably, to put out an anthology. Kind of like Henry’s Greatest Hits, with maybe a few new exclusive ones on it. But I have had a few ideas for books sort of swimming around. I’m not ashamed to admit that it is insanely daunting, the idea of starting it. It’s really difficult for me because I’ve got the issue of being a massive perfectionist. I will edit my stories like thirty times before I show them to anyone.

G: But that’s not always a bad thing.

H: Yeah, it’s not always a bad thing with short stories. But, when the big thing with the book is wanting to get through the first draft without giving into my compulsive editing desires, it becomes really tricky and it’s difficult to not hate what I’m making.

G: A saying that I really like is…you’re just building your sandbox in your first draft. You’re just shoveling sand into the box and then later you can build your sand castle.

H: I think I’d try to go through an agent. The whole self-publishing thing to me seems a little bit like too much trouble than it’s worth.  Let’s say, well, let’s hope, if Congeria and some other projects I’m involved in got insanely successful and I’ve got the money and kind of the clout to be able to find an audience and self market this thing, then I’d probably look into that. But as is, I think I’d definitely feel much more comfortable going through the more traditional channels.

G: How would you describe your relationship with the horror genre overall? Is it something that you just write for fun or does it have a more profound and sentimental meaning to you?

H: I love the horror genre, I love its versatility, and I love how it’s just loaded with almost infinite possibilities. Only in the horror genre can I write something as silly as The Viewing and as brutally depressing as Duplex, and all the weirdness in between. I don’t want to over-intellectualize it, but I find horror, of all the genres, is the one that allows me to tell the kinds of stories I love telling – it’s less thinking “Oh, let’s write a horror story!” and more just the stories I tend to come up with just fall into that space. It always has a special place in my heart, no matter what other stuff I try.

G: I have a couple of outside questions for you. A gentleman named Brandon Boone wants to know: why is Peep Show so good?

H: Dammit Brandon,  you really put me on the spot here. Peep Show is so good because it uses really strange innovative camera, and inner monologue techniques. All of the cast, particularly Robert Webb, David Mitchell and Matt King are absolutely hilarious and perfect for their roles. And really it’s sort of a comedic perfect storm. All of the people who don’t know what Peep Show is, by the way, who are currently reading this – it’s an English sitcom that everyone should check out if you like weird, awkward humor.

G: Our very own Atticus Jackson asks: WHO is Henry, really?

H: He’s actually a lizard from dimension X with what I’ve been told is a reasonably easy-to-listen-to accent, and an unconvincing human disguise.