Greetings and salivations, Sleepless. It is I, Olivia White, host of The NoSleep Podcast, back with another dose of terrifying, nail-biting horror.  On this week’s episode we have six skin-crawling tales about bigamist Bigfoots, twerking Thunderbirds, cuckolded Chupacabras and meme-loving Mongolian Death Worms. In our first tale, entitled What I Saw On Top Of My Mom’s Wardrobe Will Haunt Me To This Day, author Chainsaw Dave takes us on a journey of…

Wait, sorry, no, my bad. That story got rejected. I’m being told it was only 300 words long, 248 of which were just the word ‘really’, and the ending twist was that the story was just a dream.

Now, you may be wondering two things here, Sleepless. One, ‘why is Olivia pretending to be David?’. Well, the answer to that is simple. I’m getting practise in before I have him ‘disappeared’ and stage my coup to take over the show as host. The second thing you may be asking is ‘how does The NoSleep Podcast select such quality stories, instead of the kind of rubbish outlined above?’. The answer to that is more complex, but in short: Gabrielle Loux.

For those who don’t know, Gabrielle is The NoSleep Podcast’s extremely talented story editor who, along with some story curator I’ve never heard of, works tirelessly to select the best of the best of horror fiction to be produced on the show. Gabrielle is one of our less public-facing team members, but she has one of the most important jobs on the show, and so what better to give you an insight into her fantastic work than… A NOSLEEP BLOGCAST INTERVIEW?

So read on, kiddies, as transcribed from an exclusive found footage recording, we have a glimpse into the mind of… GABRIELLE LOUX, STORY EDITOR EXTRAORDINAIRE.

Olivia: Hi Gabby, thanks for agreeing to talk to us today, and for not reporting the breaking and entering to David. So my first question to get us started is, well, about you getting started. How did you land your role at The NoSleep Podcast? Talk us through the wheres and whens.

Gabrielle: Honestly it’s not that exciting, I was actually pretty new to NoSleep at the time, both the subreddit and the podcast. I was browsing through the NoSleepOOC subreddit where David had posted a job opening for a story curator. Unfortunately at the bottom of the post was a little addendum that applications were closed for it, but I decided to email him anyway just to let him know I was interested in any future positions. He told me to go ahead and apply for it anyway, and here I am!

O: A nice lack of sickening violence against David in that story. So when did you come aboard? How many seasons have you worked on now? How many episodes? How many stories have you read in total? I want stats!

G: I came on at the tail end of season 5 so… about four total season now. So four times twenty five would be like one hundred episodes? Not including bonus episodes. I have read 1,234 stories. Which I just made up.

O: So you’ve been with the show for a fair while then. Which leads me onto my next question… which is your absolute favorite story the show’s done?

O: Oh yeah, I hear that Danny guy’s name a lot. On a similar note, has a story ever severely terrified you just from reading it for consideration?

G: Many stories by Jared Roberts (My Dad Finally Told me What Happened That Day, Arkansas Sleep Experiment) have also given me shivers while reading them.

O: Arkansas Sleep Experiment terrified me too. It was even scarier for me cos I was there in person. So outside of the podcast, what would you say is the scariest horror novel you’ve read?

G: It’s been years since I read it, but “The Taking” By Dean Koontz was terrifying. I haven’t read a lot of Stephen King but “The Girl Who Loved Tom Gordon” was also very good. And it’s not exactly horror but A Good Man is Hard to Find by Flannery O’ Connor was a short story I had to read in college and it absolutely messed with my head.

O: So we’ve talked about books, but what about horror movies? Tell me a few of your scariest movies. What’s likely to get you to hide behind the couch, peeking over the top in fear, or at least feel slightly uneasy?

G: It gets made fun of a lot, but Paranormal Activity really did scare the shit out of me when I first watched it. The Strangers was another one that really spooked me. I’d say my favorite horror movie is A Tale of Two Sisters which is a Korean horror film. It’s a good scare but also has a really emotional ending. 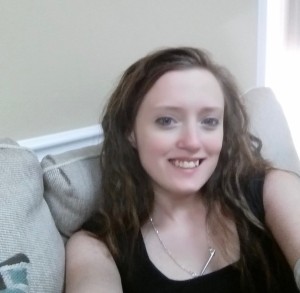 Gabrielle Loux, minutes before doing something scary to stay on brand

O: If you found yourself in a real life slasher movie, which archetypal role would you be cast into? For eg jock? Cheerleader? Mysterious goth? Or maybe the masked killer themselves?

G: Oh that’s a good one. I’d like to think I’d be one of the chicks at the end of Death Proof who triumphs over the bad guy? If I had to pick an archetype though I’d probably be like the Nerd/Stoner. But this quiz I just took after you asked me this said I’m The Final Survivor and I’m okay with that too.

O: Congrats! I’d definitely be the mysterious goth who gets killed in the shower or something. But moving on from survivors, who or what is your all time favorite horror villain, and why?

O: There’s a popular documentary called Ghostbusters, about a team of people who go around busting ghosts and the Statue of Liberty. If you could select just four of the NoSleep Podcast team to operate under you as busters of ghosts, who would you pick?

G: I would only need Peter Lewis.

O: On that subject, do you believe in ghosts?

G: I’ve never had a paranormal encounter before, I’d say I lean toward skeptic but that’s not to say I completely deny the existence of ghosts. They just may not want to bother with me.

Well. I did have a strange Ouija board experience but I’m certain that was my friend messing with me.

O: We’ve recently expanded the editorial team and begun a new push for story submissions at The NoSleep Podcast. How do you feel that’s going? I’m going to pretend I don’t know the answer to this; have you had some great stories submitted?

G: It’s going super great. I really love how streamlined the new process is, and having a second person to discuss stories with is also really great. We have gotten some fantastic submissions so far; we’ve always had great authors submitting, but now the submissions process is more public, we’re getting even more quality.

O: Yes! Finally my life has purpose. So tell us, as the NoSleep Podcast story editor, what are three things you personally look for in a horror story?

G: I don’t really look for anything in particular other than it being well written and well formatted and scary, haha. I try to stay open to a lot of different things so we’ve got some variety.

O: Since I make them, it’d be remiss of me not to ask what your favorite horror video games are? And what are your top three video games in general?

G: I have a confession to make and that is that I don’t do horror video games. For some reason that’s where I draw the line. I just get so viscerally terrified. I couldn’t finish P.T. and my friends basically had to hold me down and make me finish that Resident Evil demo that was released a last year [Editor’s note: That’s Resident Evil 7 and that demo was pretty hardcore. I’m impressed]. I think the last horror game I actually sat down and played was Fatal Frame and that had to be in like seventh or eighth grade [Editor’s note again: Okay that’s also pretty hardcore].

In general my top three video games are

O: Okay, last couple of questions since we’ll have to wrap this up as I can see flashlights and hear the guard dogs. I hear on the grapevine that you’re working on another podcast called Congeria. Anything you can tell us about that? Who else is involved in this cool-sounding project?

G: Congeria is a brand new podcast coming out next year! It is the brainchild of NoSleep narrator Atticus Jackson and regular author Henry Galley.

Basically, each season is going to be a self-contained story with different characters and plots. The first season follows a private investigator after she gets herself tangled up in a missing persons case and a local cult obsessed with death.

You’ll definitely hear a lot of familiar voices on the show such as Eden, Addison Peacock, Mike DelGaudio, Jeff Clement, David Ault, James Cleveland, and Alexis Bristowe – just to name a small handful. We’ve even got a cameo from David Cummings himself. There’s also several extremely talented voice actors coming from outside of NoSleep as well such as Angel and Harbinger of Nightmares. Honestly it’s a huge project and I’d encourage everyone to check out our twitter to get more info on who’s involved and new developments.

O: And finally. If you could have any deceased horror author come back as a ghost and write a story exclusively for the podcast, who would it be?

[The tape ends there]